You are here: Home / Flavors of Life / Uit de Keuken 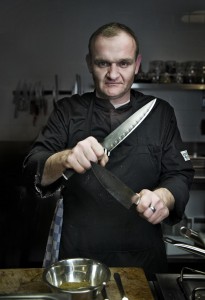 Graham Sydney is originally from South Africa, growing up in the sugar cane fields of KwaZulu-Natal. Although he lived in the country during the apartheid, a time of racial segregation, his childhood was blissful and carefree. He loved to cook as a young boy, making everything from roasts and cakes to frying the fresh catch of the day. By the age of 10, Graham could prepare three-course dinners for his family. After high school graduation, however, he planned to pursue accounting. His intended track took a turn when he got a job in a restaurant before heading off to college. Hotel management school, followed by restaurant work, became the new road. Ending up in Johannesburg, he experienced the aftermath of the apartheid. After having a gun held to his head when closing up the restaurant one night where he worked as a manager, Graham wanted out. It was the year 2000 and he knew it was time to leave South Africa.

He landed in London, but did not stay long. During a short trip to Amsterdam to visit a friend, the city captured his heart and he decided to call the Netherlands home. With only 400 gilders (180 euros) and a backpack, he started his new adventure abroad. In 2006, Graham received an opportunity to do a short assignment in Nepal, training chefs in Western cuisine. Two months somehow turned into three and a half years. On the side, he engaged in incredible endeavors, from training the British Army Gurkhas to cooking for expeditions at Everest Base Camp. When his Nepalese responsibilities were complete, he returned to Amsterdam and the next phase of his life began. In 2012, he partnered with a friend to serve healthy, tasty, artisanal food; Uit de Keuken was born.