You are here: Home / Flavors of Life / Toufik Belaid

Toufik Belaid, originally from Algiers, Algeria, first travelled to Amsterdam for a short holiday and found it to be an enchanting, open-minded city. The 19-year-old man casually thought: why not spend a couple of years abroad? Deciding to stay on a whim, the adjustment proved to be greater than he initially imagined, especially going from a 500 square meter (5,382 square foot) childhood home and being son of the mayor to just another face in the crowd living in an 8 square meter (86 square foot) room. Without many employment opportunities available, as he was still waiting to sort out his permits, he found work in a restaurant. Although he had no experience, he was forced to learn in order to sustain himself financially. He started at the bottom and worked his way up. Ultimately earning the title of head chef at a prestigious establishment, he felt, after many years, that it was time to start a place of his own. Introducing the Dutch to Algerian specialties, Restaurant Algiers opened in January 2013. 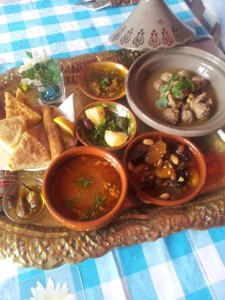